Out there, we've walked quite friendly up to Death, —
Sat down and eaten with him, cool and bland, —
Pardoned his spilling mess-tins in our hand.
We've sniffed the green thick odour of his breath, —
Our eyes wept, but our courage didn't writhe.
He's spat at us with bullets and he's coughed
Shrapnel. We chorused when he sang aloft,
We whistled while he shaved us with his scythe.

Oh, Death was never enemy of ours!
We laughed at him, we leagued with him, old chum.
No soldier's paid to kick against His powers.
We laughed, — knowing that better men would come,
And greater wars: when each proud fighter brags
He wars on Death, for lives; not men, for flags. 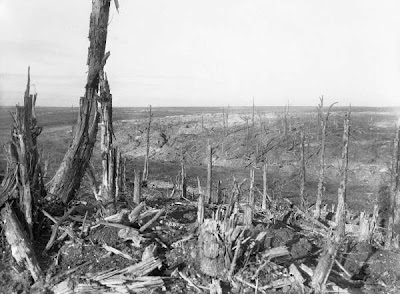 I have been listening to Benjamin Briton's War Requiem and had to pretty much stop everything to just listen when I heard these lyrics. Briton wrote War Requiem in memory of three friends who died in World War II, and he used many of Wilfred Owen's poems as the text for the requiem. Owen was a poet who wrote about his experiences in World War I, which, of course, is why I'm listening to Briton's Requiem.

I have been quite haunted by Testament of Youth. I've already mentioned how the memoir has set me off on a bit of a WWI fixation, but in all honesty it is more than just a desire to learn more about the War (although there is that as well); I want to understand what happened and see how in the world what Vera Brittain experienced could ever have occurred. In Hew Strachan's introduction to The First World War, he explains that in the purely statistical, economic, historical sense, there was no Lost Generation: populations were rebounding and those lost in the War and the Influenza Epidemic had, numerically, been replaced. But in the emotional, pyschological, and spiritual reality of post-War life, Strachan points out, there very much was a Lost Generation that left behind wounded, devasted lives who would have to reconcile themselves to living while bearing all they had lost.

Vera Brittain was one such life.

If ever there was someone unprepared to live the realities of war (not to mention modern war), it was Vera Brittain at the beginning of the War. Brittain grew up at the very end of the Victorian era, and Vicatorian ideas about propriety, manners, relationships, and a woman's place in the world were still very much in place in the provincial town where Brittain grew up. Her desire to study and go to Oxford baffled, confused, and even angered her parents, and she was left largely on her own to prepare for her exams, apply to Oxford, and navigate actually getting to Oxford. A bright, motivated spirit was not exactly in high demand in the future wives of Great Britain! Brittain was so sheltered as she was growing up that going to Oxford to live in a dorm was shocking and eye-opening, so the reader knows from the beginning that training as a VAD, nursing, and serving on the front will be a seemingly unbearable, horrible, and shocking experience for Brittain.

Given how hard Brittain worked and how important going to Oxford was to her, it is truly impressive that she gave up Oxford after her first year. Her brother, Edward, and soon-to-be fiancé, Roland, enlisted as soon as war was declared, and Brittain felt she must do something to help the war effort.

Brittain makes it very clear that she had no real desire to nurse; she volunteered because she needed to do something on the same scale as Edward and Roland. She also makes it very clear that these three, like thousands of others, felt a patriotic duty to their country and so gallantly, yet foolishly, joined the war effort with very little understanding of why the war was being fought and how their participation would affect the outcome of the war. This blind allegiance and youthful optimism are portrayed in a painful, poignant manner as Brittain details the story of her war experience. We know things will end badly, she knows things will end badly, yet her writing is so skillful that each battle, each letter, each waiting, each turn is painful and heartwrenching; we experience everything along with Brittain. There were moments I couldn't breathe because Brittain had so keenly portrayed her hope, her fear, her anger, and her mourning.

Brittain wrote her Testament almost seventeen years after the war ended, and I think her older, more mature understanding of the world (and perhaps even her ability to see the rumblings of another war on the horizon) serves her memoir well. Brittain very much condemns the War to End All Wars, and like Owen finds it despicable that men, including her men, fought "Death" for "men" and "flags" rather than "lives." Brittain became a pacifist as a result of her experiences in World War I, which is not terribly surprising. But she was a pacifist not just because she had seen the individual and personal destruction that war had brought; she also saw the historical and economical uselessness of war. Several years after the War ended, Brittain and her good friend Winifred Holtby actually toured the parts of Germany and France that were most affected by the War, and Brittain came to understand that this war had cost everyone, and though the Allies may have been named the victors, no one really won.

Brittain struggled for many years (which she documents in her memoir) to find purpose and to understand how her life could have any meaning without Edward, Roland, and other beloved friends she had lost. She details her darkest times and explains how alone she truly felt. Slowly, she starts to move on, and, eventually, contemplates a completely different kind of life with a man with whom she does not share the War (at least not in the same way that she shared the war with Edward, Roland, and others). Towards the end of her book, however, she finds some reconciliation with what had happened, at least in terms of herself:

"If the dead could come back, I wondered, what would they say to me? Roland [her fiancee]--you who wrote in wartime France of 'another stranger'--would you think me, because I marry him, forgetful and unfaithful? Edward [her brother], Victor, Geoffrey, would you have me only remember you, only dwell in those days that we shared so long ago--or would you wish my life to go on? In spite of the War, which destroyed so much hope, so much beauty, so much promise, life is still here to be lived; so long as I am in the world, how can I ignore the obligation to be part of it, cope with its problems, suffer claims and interruptions? The surge and swell of its movements, its changes, its tendencies, still mould me and the surviving remnant of my generation whether we wish it or not, and no one now living will ever understand so clearly as ourselves, whose lives have been darkened by the universal breakdown of reason in 1914, how completely the future of civilised humanity depends upon the success of our present halting endeavours to control our political and social passions, and to substitute for our destructive impulses the vitalising authority of constructive thought. To rescue mankind from that domination by the irrational which leads to war could surely be a more exultant fight than war itself, a fight capable of enlarging the souls of men and women with the same heightened consciousness of living, and uniting them in one dedicated community whose common purpose transcends the individual. Only the purpose itself would be different, for its achievement would mean, not death, but life.

To look forward, I concluded, and to have courage--the courage of adventure, of challenge, of initiation, as well as the courage of endurance--that was surely part of fidelity. The lover, the brother, the friends whom I had lost, had all in their different ways possessed this courage, and it would not be utterly wasted if only, through those who were left, it could influence the generation, still to be, and convince them that, so long as the spirit of man remained undefeatable, life was worth living and worth giving. If somehow I could make my contemporaries, and especially those who, like myself, had once lost heart, share this belief; if perhaps, too, I could have children, and pass on to them the desire for this courage and the impulse to redeem the tragic mistakes of the generation which gave them birth, then Roland and Edward and Victor and Geoffrey would not have died vainly after all. It was only the past that they had taken to their graves, and with them, although I should always remember, I must let it go. '...Under the sway / Of death the past's enormous disarray / Lies hushed and dark.' So Henley had written: and so, with my eyes on the future, I must now resolve."

Testament of Youth is so many things: it is a condemnation of the choices leading up to and continuing World War I, it is a plea for pacifism and alternative conflict resolution, it is an expression of grief and mourning, it is an example of healing, but most of all it is a labor of and testament to love: yes, Brittain mourns the men she lost in the War, but she also brings them to life, pays tribute to them, and records them so their memories may live on.

I owe a huge debt to Laura for bringing my attention to this book (you can check out her review of the book here). This is one of those books that changed my life, and I know it is a book that I will come back to again and again. As an American, my working knowledge of World War I was fairly vague (as I think is fairly typical for most Americans with only a high school understanding of World War I). The emphasis had always seemed to be on World War II, and the US doesn't have any sort of observed day of remembrance and acknowledgment for World War I, probably because the country became involved in the conflict rather late in the game. This book gave me new respect, appreciation, and feeling for all those who fought and sacrificed in World War I. Thanks to this book, you will not be forgotten.
Posted by Read the Book at 2:23 PM

Thanks! It was so, so good, and I don't feel like I adequately expressed how much I loved this book. It took some time to read, but it was well worth it. Glad you're back on the blogosphere!

What an excellent, heart-felt review. This book was a revelation to me also, and I've gone on to read her other Testaments as well.

Thanks, Lisa. I will definitely be pursuing her other Testaments eventually!

I loved the book when I read it years ago and also her later Testament of Experience. The BBC made a good adaptation of T of Youth in 1979 and just re-released the dvds last year.

Oh, Katrina, thanks for the heads-up about the DVD. I tried to watch some of it on Youtube, but the quality was awful. I'll have to check out the DVDs!

Wow, that's an excellent review. I'm glad the book was as powerful for you as it was for me!

Thanks, Laura! And thanks again SO MUCH for bringing it to my attention!

Strictly speaking, Vera Brittain didn't becoem a pacifist until 1937, four years after Testament of Youth was publihsed, though the writing of the book undoubtedly influenced her conversion. I recommend Vera Brittain: A Life by Paul Berry and Mark Bostridge