I received an advanced copy of this book from NetGalley 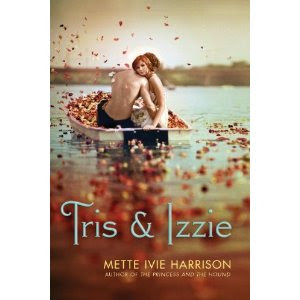 I'll admit two things: I was pretty excited when I saw Tris & Izzie, by Mette Ivie Harrison listed on NetGalley; I had seen it mentioned on both Angie's and Steph's blogs and found the cover just breathtaking. Secondly, I am not familiar with the fairy tale Tristan and Isolde, but I do know of the opera story, and I saw the surprisingly un-terrible movie from a few years agao.

All that being said, I was pretty disappointed. Some of that may be because I don't know the fairy tale, but the weaknesses in the plot and writing and characters went far beyond any lack of knowledge of the original on my part. I was expecting a story of star-crossed lovers who loved and lost, but I got a poorly structured, ridiculously magical, over-the-top (and not in a good way) adventure story instead.

Izzie has everything she wants: a great best friend, a super popular boyfriend, and a mom who does her best to provide for her and love her in the wake of her father's death when she was five. Things start to change (quite quickly) when Tris starts to hang out with Izzie's boyfriend. Turns out Izzie and Tris are destined to love each other, fight evil, and use their magical powers together to slay Gurmun, the demonic, seemingly (but not really) immortal serpent terrorizing the magical kingdom of Curvenal.

As I read, I kept thinking about Harry Potter. I don't know if this was intentional on Harrison's part or not, but everything from Izzie not knowing of her magic right away to the way she decides to sacrifice herself and the whole process she goes through to come to that decision came across as watered down Potter magic. Add to this the fact that none of the major plot developments have a sense of inevitability or reason for happening, and the story really falls flat.

What probably drove me the most crazy about this book, however, was the characterization of Izzie, Tris, Mark (Izzie's boyfriend at the beginning), and Branna (Izzie's best friend). None of these characters are terribly compelling and much as they try, none of them are dynamic either in the literary sense (they change and grow) or the personaltiy sense (you care and want to know what happens to them). Reading the book was like watching cardboard cut-outs being moved around a stage. They lacked depth and any sort of logic or reasoning behind their interactions with each other: Izzie and Tris fall in love and it's not because of the love potion? why? Mark feels very little about Izzie breaking up with him despite supposedly loving her deeply? why? Izzie has no problem with Mark and Branna getting together about 30 seconds after she breaks up with Mark? why? Mark easily and completely falls in love with Branna 30 seconds after Izzie breaks up with him? why?

There was one thing that I liked about this book: the cover. It is beautiful and haunting but doesn't really give an accurate impression of what the book will really be about (and it helped contribute to my confusion about why there was a giant evil serpent in a story that I thought was about a pre-Romeo and Juliet Romeo and Juliet). Sadly, the story didn't live up to its gorgeous cover.

I know! I was really hoping this would be something I could point my freshmen towards since we read Romeo And Juliet, but alas, no. Honestly, the whole time I was reading this I kept thinking, "I could write something so much better!"