Love It / Hate It

This post is going to be a rather random conglomeration of bookish things from the weekend. And then I PROMISE I will review East of Eden!

2010 has been a rather slow reading year for me so far. I don't know if I have read less because I got sick several times, was frantically trying to play catch-up with my grading (and nothing kills the reading spirit like reading horrible sophomore writing...), discovered the dangerous world of book blogs, or was trying to slog my way through the now infamous East of Eden (the albatross around my neck, the sword dangling above my head...okay, you get the point), but I have resolved to be more intentional about my reading time. Basically, this means carving out the time in the evening before I go to sleep for reading books and not, erm, book blogs, which, apparently, have become my new addiction!

Due to a variety of things (economic climate, NO storage space, random forgetfulness, aforementioned frantic grading), I have also been rather slack in the book-buying department. This is not a bad thing, but it is surprising. I am a person who is almost singularly unsuccessful when it comes to resisting the siren call of books in a bookstore. When I proudly announced to some friends that I had only bought 2 (TWO!) books since the beginning of the year, and those books were used (I got both of them for $3!), they laughed at me. LAUGHED! They obviously don't understand what an achievement this is for me. And I wasn't even trying to avoid buying books. It just...happened. Ironically, if I had been trying to curb my book-buying, I probably would have been a lot less successful. Of course, now I feel like I am justified in going on a book splurge...

I have a love/hate relationship with my public library. For the first two years that I lived here, I did not have my own computer, so I used the computers at the library. Computer use was the extent of my library experience because I was not being so successful with the resisting-books thing, and I was happy. When I finally decided to try to be more concientious about my book purchasing, I thought the library was an obvious resource that I could use. This is where the hate part of the relationship began: this library system (in general) has a limited selection, charges fees for odd things, and has a generally unhelpful, unfriendly staff. More often than not, a library visit would cause grumbling on my part because I couldn't find the most basic of things that I would like. The system has either gotten better, or I have gotten easier to please, but I am currently in a "I LOVE the library" phase. Everything I have searched for I have found, the librarians have been unusually helpful, and I have received holds more quickly than anticipated. And today, I found a new reason to love my library: the annual Friends of the Library used book sale. It was glory! It was bliss! And I even managed to stick to my self-imposed limit of only spending $10. Here's what I bought: 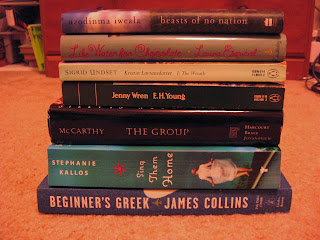 And my two particular favorites are actually two books that I would have passed up before I started reading book blogs!
Jenny Wren, by E.H. Young (first Virago!), and The Group, by Mary McCarthy! 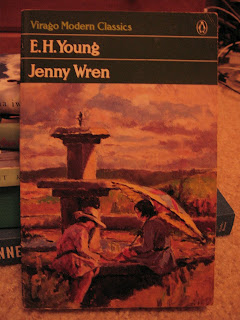 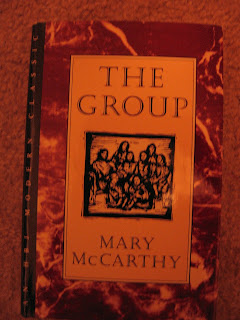 Congratulations on your great finds at the book sale! I hope the recent phase of loving your library lasts...well, forever:) After several horrible incidents with my last library, I thought I was on the verge on never returning...and I didn't...we moved and I absolutely love, love, love our new library!

I, too, hope my happiness lasts, but I don't think this library system will every measure up to my parents'. Their library has EVERYTHING, including a great selection of BBC shows and miniseries, which my library definitely doesn't!

Yes this looks like a very good haul, I look forward to reading your thoughts on them when you have read them - especially the Virago which I have not seen before. Lovely blog, Hannah

Hello! I just found your lovely blog.
I became addicted to book blogs a year or so ago and know exactly what you mean. Sometimes I spend more time reading ABOUT books than reading the actual books.
Library-wise, I can't complain although I do wish that they would purchase new releases a bit faster :-)
I look forward to your thoughts re your new books. Nice selection and in great condition.