Much as I love to read, I often struggle to find the kind of time (i.e. hours and hours upon end) that I would like to have to spend reading. As an English teacher, reading is a large part of my job, and I spend lots of time reading student essays, test questions, and journals. Most of the time, this reading cannot compare to the reading that I would rather be doing. I do read every night before I go to sleep, and I find myself reading during at least one meal each day; I get snippets and tastes, but extended periods of reading times are generally confined to weekends and breaks from school. I become a reading monster during these precious hours of extra reading time, and so it is pretty easy to tell what time of the year it was on my list of books read!

As I've already mentioned, January and February were pretty dismal reading months for me. I got sick several times, I was slogging my way through East of Eden, and I was behind on my grading before the quarter even began (those of you who teach English know how this is possible; those of you who don't teach English should be thankful for your blissful ignorance). I usually have no trouble reading multiple books at once (a phenomenon that continues to stun and amaze my roommate, a strictly one-book-at-a-time reader), but I knew if I gave in and read something other than East of Eden, I would never go back and finish East of Eden. And I WANTED to finish East of Eden (that, Kari, is dedication!).

Thus it was that I was pleasantly surprised to find myself at the end of March with a quite respectable number of books under my belt. This is the first time I have been specific about the month in which I completed a book, and I am proud to say that I finished more than triple the number of books in March than I did in either January or February.

I may not know the first thing about college basketball (ask my friends; they will confirm this fact), but I got lots of reading done! Who needs basketball when you can read a book about a mysterious glass disease, a cursed girl who must complete three crazy tasks, and the backstory of the mysterious Weird Sisters. Here is the list of books I read in March:

My top three of the month were A Homemade Life, The Girl With the Glass Feet, and Impossible.
Posted by Read the Book at 8:29 AM 1 comment:

It's Hour 15 of the Read-a-Thon, and my reading has finally kicked into high gear! I tossed The Everafter aside after only about 20 pages because it wasn't holding my interest. I have moved on to Lunch in Paris; I am enjoying it, but I keep comparing it to A Homemade Life (you can read my review if you need a break from the books), and it doesn't hold up too well in the comparison...I'm trying to stay strong, but I'm pretty sure I'm going to succumb to the siren call of Gardens of Water on my i-pod and then drift into blissful sleep.
Posted by Read the Book at 9:06 PM 1 comment:

Well, I finally get to hunker down and read, read, read! Shades of Grey wasn't really doing it for me, so I'm going to switch gears a bit. I'm planning on reading as late as I possibly can tonight (I'm hoping until midnight, but we'll see if it happens as my body firmly believes that 10 p.m. is bedtime!). I'm going to answer the survey and then hit the books!

1. What are you reading right now? I just started The Everafter, which I'm going to alternate with Lunch in Paris (if The Everafter is too scary, I'll change accordingly!). I will also continue listening to Gardens of Water (it is amazing!).
2. How many books have you read so far? 1 (Major Pettigrew's Last Stand)
3. What book are you most looking forward to for the second half of the Read-a-thon? Probably Lunch in Paris, Love and Summer, or My Life in France.
4. Did you have to make any special arrangements to free up your whole day? Well, I didn't free up my whole day (or even most of it), so no. :)
5. Have you had many interruptions? How did you deal with those? Again, see the above answer.
6. What surprises you most about the Read-a-thon, so far? How much I want to be reading instead of doing what I have to do! Oh, and it's been really nice visiting new blogs.
7. Do you have any suggestions for how to improve the Read-a-thon next year? Nope!
8. What would you do differently, as a Reader or a Cheerleader, if you were to do this again next year? I would definitely plan a little better so I could actually read for most of the time.
9. Are you getting tired yet? Yes, but that's probably because I'm an English teacher and the kiddos are wearing me out! ;)
10. Do you have any tips for other Readers or Cheerleaders, something you think is working well for you that others may not have discovered? Keep it up! It's been awesome!
Posted by Read the Book at 7:25 PM 1 comment:

Book club was FANTASTIC (we call ourselves the Jane Austen Book Club because the first book we read together was Northanger Abby), and I am excited to plow through the school things I need to get done (planning, grading outlines, brushing up on Midsummer Night's Dream) so I can spend the majority of my evening reading. I might not get many books finished, but I am thankful that this read-a-thon is inspiring me to read more than I usually would on a Saturday.
Posted by Read the Book at 2:19 PM 2 comments:

24 Hour Read-a-Thon: And So It Begins

I am very excited to be participating in the read-a-thon for the very first time! I will not, sadly, be able to read all or even most of the day, but I am going to try to do as many bookish things as possible if I can't actually be reading. I also have to do my taxes (ugh), but I am choosing instead to focus on my international bookclub (we meet via Skype) and a trip to McKay's (a fabulous used bookstore) with my roommate to try to help her get over her fear of their organizational (or lack thereof) system.

This is how I started my morning: 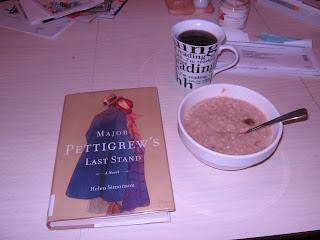 Here is my list of potential books for today:
> 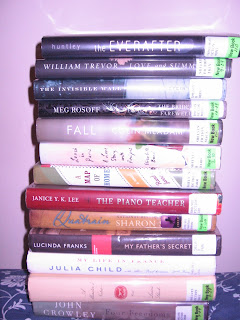 And now I'm off to chat about East of Eden and Major Pettigrew's Last Stand (you should go out and read it RIGHT NOW!!!)
Posted by Read the Book at 9:46 AM 4 comments:

I read Impossible, by Nancy Werlin*, as my folk tale selection for Carl's Once Upon a Time Challenge. I had originally picked it up to see if it was a book I could include on my students' summer reading list, but due to Lucy's unfortunate prom night, I can't put it on the official list. I can, however, review it here.

This novel was inspired by and based upon the "Elfin Knight" version of the ballad "Scarborough Fair" (note: this is not the same version that Simon & Garfunkel sing, but their version will work as a reference point). We are introduced to Lucy Scarborough, a girl who is loved by her foster parents and perfectly willing to let the story of her mother's madness go uninvestigated. In fact, the only interactions Lucy has with her biological mother are rather disturbing: Miranda, Lucy's mother, finds her sporadically, sings her personal version of "Scarborough Fair," and tries to persuade her (sometimes rather violently) of the importance of the ballad's message. These encounters affect Lucy mostly through the potential for embarassment for herself and the pain they cause her foster mother, Soledad.

All this changes after Lucy's prom night because Lucy was raped. Despite precautions, Lucy is pregnant and faced with a completely different life than the one she had planned. Little does she know that her life will change in more than one way because of this pregnancy: Lucy's attacker was not, as everyone assumes, her prom date, Grey, but the sinister, more-than-slightly icky Padraig Seeley, and with Lucy's pregnancy, a family curse is set into motion:

From the sting of my curse she can never be free
Parsley, sage, rosemary and thyme
Unless she unravels my riddlings three
She will be a true love of mine

The rest of the novel centers on Lucy, her parents, and Zach, a good friend, trying to find a way to perform these tasks and stave off the madness that threatens Lucy.

I won't say much more about the plot because I don't want to ruin the suspense or surprise that builds throughout the rest of the novel. Werlin does an excellent job of conveying a sense of forboding as Lucy's pregnancy progresses; we feel the urgency of Lucy completing the tasks just as Lucy and her family do. Werlin builds this sense of forboding and tension especially well as Lucy approaches and performs the third task. In terms of writing and storytelling ability, this part of the book is the best. It is also in this part of the book that the folk tale/fairytale aspects of the story become most prominent. I was reminded of Sir Gawain and the Green Knight many times during my reading, and the similarities become most apparent and meaningful during the performing of the third task.

Perhaps the greatest strenght of this book is that it will appeal to a wide range of YA readers: it has a smattering of everything (suspense, horror, romance, fantasy), and Werlin moves the action of the story in such a way that the reader is hooked early and wants to keep reading. The characters are not the deepest or most fully developed, but the strength and beauty of many passages more than make up for this. This is not a pat, formula novel, and the many unexpected developments kept the story fresh.

*I really love this cover; it is so evocative of the sense of the novel.
Posted by Read the Book at 1:03 PM 4 comments: