My 2011 reading has certainly started out strong; not only did I finish Bleak House, but I also stumbled upon, fell in love with, and subsequently devoured a series of books in a way I haven't done in a LONG time. What can I say? I'm in literary love with Juliet Marillier.

Photo Credit
I had intended to post a review about how i live now, by Meg Rosoff, before reviewing Daughter of the Forest, but the novel literally wouldn't leave me alone: I pretty much read, slept, breathed, ate, and thought the Sevenwaters Trilogy once I picked up Daughter of the Forest. I've read the first three books in less than three weeks (and at 500-600 pages each, that is no small feat!). These books are so good that I gave up sleep, ignored potential social gatherings, and brought lunches that didn't require heating so I could spend as much of my lunch hour as possible reading! Like I said, I'm in love, and book love for me is never more strongly demonstrated than when I am willing to burn the midnight oil and stay up with a book, even if it is a school night!

I first learned about Daughter of the Forest from Angie. She included it in her favorite fairy tale retellings, and since I have loved every book I've read because of her blog, I knew this would be a good story. Little did I know HOW good!

Sorcha and her six brothers live in the forest of Sevenwaters, an estate full of lore and legend in the Ireland of the far past; they are left to essentially fend for themselves, especially Sorcha and Finbar, because their father was never quite the same after their mother died giving birth to Sorcha. Sorcha is never sure how her father feels about her (or if he even knows she exists; she feels that her father finds her at best insignificant and at worst the cause of his beloved's death), but she is deeply loved and well taken care of by her brothers. Her brothers represent the best and the brightest of the Sevenwaters estate, and they are quite blissfully happy until a young Briton, Simon, is captured by their father's spies. Life is further complicated by the coming of Lady Oonagh, their father's new wife. All the siblings, with the exception of one brother, sense a sinister danger in Lady Oonagh, but they don't quite know what to do. Conor, Finbar, and Sorcha, especially, are greatly troubled by Oonagh's presence because they are gifted with the supernatural powers of their ancestors, and they see most clearly and most specifically the threat that Oonagh poses. Indeed, Oonagh herself knows that these children know who and what she truly is, and so she conveniently disposes of them by turning the six brothers into swans, knowing full well that Sorcha will not survive long without the protection of her brothers. 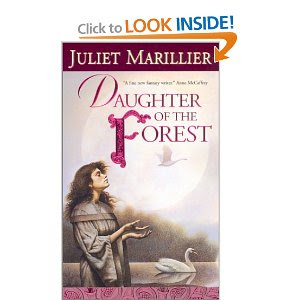 Sorcha, naturally, despairs when this occurs, but she is given hope when the Lady of the Forest comes to tell her that she, Sorcha, has it within her power to free her brothers. She must weave six shirts from a plant covered with barbs and spines for her brothers, and she must remain completely silent while she attempts to accomplish her task: no speaking, no cries of pain, no moaning, yelling, or laughter are permitted her; to speak is to curse her brothers to their swan-enchantment forever.

Daughter of the Forest is compelling for two reasons: the excellent writing and the skillful discussion of love, sacrifice, trust, and truth. This novel is not just a thinly veiled morality tale (as so many fairy tales, at their cores, are); it is a treatise on the power of love and what a person will do, with little care for herself, for love. Sorcha's love for her brothers does more than just bind her to silence and an almost horific job in weaving the six shirts; she endures isolation, violation, fear, betrayal, and confusion for her brothers as well. She, a child of Sevenwaters, who is bound almost supernaturally to the forest, as if the forest was part of her soul, finds herself in a strange land, without friends, unable to communicate, and still forces herself to apply herself to her task, knowing that her life and happiness mean nothing if she cannot free her brothers.

On her website, Marillier explains that she "sought the human dilemmas at the heart of the fairytale, for such tales have at their core the most wondrous and the harshest of human experience, the best and worst of human behaviour." Marillier also explains that fairy tales tell stories that resonate deeply with us because they highlight the things that we care about most. I appreciated that Marillier dealt with many different types of love: at the heart of the novel is love for one's family, a bond for Sorcha and her brothers that almost seems too strong for such a simple word. Marillier shows the power and importance of love between friends in Sorcha's interactions with Simon, Linn, her brother's dog, Red (a Briton who saves her from drowning), and Marjorie and John (Britons of Red's household who become Sorcha's protectors and some of her closest friends).

And of course, what fairy tale would be complete without some romance? What I appreciated most about this aspect of Marillier's story was that Red, the man who loves Sorcha and who, in the end, Sorcha ends up loving, is not in any way an ideal, romanticized man. While he protects and cares for Sorcha, he is a man so tightly bound to his honor that he can scarcely be honest with himself (let alone Sorcha) about what he truly feels for her; he is a fair man, but he shows his truer, gentler self to very few people. Marillier also paces this aspect of her story very well. There are no heady, swoony glances followed by immediate, deep, undying love for Red and Sorcha. They are tentative and unsure; they blunder; they make mistakes; they cross signals and read each other incorrectly; they are both stubborn to the point of almost missing the chance to be with each other. And while in the end they are together, Marillier does not minimize Red's sacrifice of everything he has ever known nor make it easy for him to give up Harrowfield and his entire life; in fact, this decision comes back to haunt Red in the next book, Son of the Shadow, as he learns that his decision did not necessarily cost himself alone.

Above all, however, I appreciate that Marillier tells a story that is honest and true to life: there are no easily tied up endings in this story; characters feel the effects of their decisions, and the hurts and injuries that result from Oonagh's curse do not disappear as soon as the curse is broken. The siblings are, quite literally, constantly reminded of the years, the innocence, the love that were stolen from them. The siblings are reunited, but they must work to restore their relationships and face many challenges to reclaim the happiness that they lost at the hand of a cruel sorceress. As Sorcha herself says, "Real life is not quite as it is in stories. In the old tales, bad things happen, and when the tale has unfolded and come to its triumphant conclusion, it is as if the bad things had never been. Life is not as simple as that, not quite."
Posted by Read the Book at 4:55 PM

You have been awarded a "Stylish Blogger" award from My Outlander Purgatory!

If you want to pass it on (it's totally optional) here's what you do:

We think you have a great blog - and want to let others know!

Carol and Tracey from myoutlanderpurgatory.com

Thanks, guys! This is so cool! And Carol, you totally need to check out the Sevenwaters books! They have enough Celtic things in them to give you your Outlander fix, but they're different enough that they give you a break from the craziness that is Jamie and Claire!