When the Fates Conspire...

Hello, blogging friends. I was doing so well; my last two posts were up within a week of each other, and I had grand intentions of reviewing the The Cookbook Collector and Eat Pray Love (I won't bore you with how much the lack of commas in this title bugs me!)and sharing some of my favorite Atticus (of To Kill a Mockingbird fame) anecdotes.

And then the Fates (also known as the Realities of Real Life) intervened with: a massive two-day headache (possibly a migraine?) complete with nausea and general ickiness, family friends visiting from the Dominican Republic who needed an additional translator, and my parents' internet, which decided that it hated not only my computer (old news) but also all computers currently residing in my parents' home.

However, I am back, and I have exciting news! I received a call last Thursday to interview for a job at a high school! It is the first application that has actually turned into an interview (yay for potential employment and the hope of moving out of my parents' place. Don't get me wrong: I am so thankful that they have let me stay with them, but this CANNOT be a permanent situation...). I spent this weekend shopping for an interview outfit, telling the story of my interview over and over again, and generally being nervous about said interview.

The interview went really well, and now I am waiting to hear back from the school. This waiting is definitely more nervewracking and stomach-twisting than the waiting for the interview day. So to distract myself yesterday, I went to see Eat Pray Love.

And this, my friends, is where we have the opportunity to discuss a rarity in my book world: I liked the movie better than the book. I loved Elizabeth Gilbert's voice and writing style, but there was just a bit too much Eastern mysticism, God is who you want him to be, let's all chant in Sanskrit for my taste. Despite all this, however, I will readily admit that this book (and the movie) really reasonated with me; I mean, how could it not? It's all about a woman who makes a seemingly crazy, huge change in her life, and her life is literally never the same. For the better. How could I not relate? The movie had this same effect on me (the spiritualism was played down quite a bit while still retaining Gilbert's distinct voice and humor, which I thought was a much better tone than the book) and proved to be a good distraction from my interview worries because it was like taking a mini vacation to three exotic locations (in only 3 hours!). I especially loved the scene at the end where Liz explains the physics of the quest: she essentially said that making a change can't be anything but good. And in my case, I think she's right. 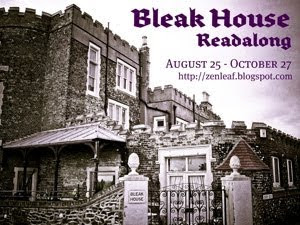 On the bookish front, I am very excited to participate in the Bleak House Readalong that is being hosted by the Zen Leaf. I have been meaning to actually finish this book for quite some time, and I had vowed back in June to read it during my less hectic, temporarily (hopefully) unemployed time. And here is the perfect incentive! Many consider this Dickens' greatest work, so head over to sign up if you want to read with us!
Posted by Read the Book at 5:15 PM

Congratulations on the interview! If you interview half as well as you blog, I think you're a shoo in. :)

I need to check out EPL (the movie). I loved the book, so I'm glad the film's not discrediting it. Another thing for my never ending "to do" list.

Oh my goodness! Congrats on the interview - that is fantastic news. Once you get the outfit, you're set. :)

I wasn't a huge fan of the book EPL either but really want to see the movie. I could tell I would love it. Weird.

Thanks for the votes of confidence! I am still waiting to hear (it's almost worse since they gave me a pretty specific time frame for call backs!), and I jump every time the phone rings.

Definitely let me know what you guys thought of EPL.