She's Ba-ack, or Reading Lately, or How I Joined Two Challenges

Hello, folks! First let me apologize for my absence. The end of the quarter really snuck up on me, and using every spare moment for grading and recording grades is NOT conducive to book blogging! This past week has also been crazy, but I have firmly resolved to do better, and I know that the nearness of Spring Break (please hurry. PLEASE!) bodes well for putting me back on the right blogging track.

I helped chaperone some of our students at a writing conference today, and there were some excellent sessions just for teachers. We actually got to do some writing ourselves, so I was inspired to continue writing and decided that updating my blog needed to be my first writing priority! This will probably end up being one of those random posts, so feel free to skim for the interesting bits and skip the ones that don't grab your attention!

First of all, I have decided that I cannot do justice to a review of East of Eden. I am not just trying to get out of a writing a review; I truly think that I will need to read the novel again before I can formulate a coherent, truthful response to the novel. I will reread it eventually, but I just can't handle reading it again so soon. I think I read it over too long a period of time, so I will be sure to make my second reading of East of Eden much more condensed!

Since last blogging, I have finished Andrea Levy's Small Island and have discussed it with my book club. Um...I had very mixed feeling about this book. I picked it up because Masterpiece is showing an adaptation at the end of April; I didn't know anything about it beyond the fact that it was about a Jamaican couple that immigrates to London right after World War II. I was expecting to sympathize with Hortense, I was expecting Gilbert to be a traditional sort of hero, and I was expecting a depiction of racism and bigotry similar to the depiction of those same things in the United States during the same time.

Very few of these expectations were met. Small Island was not the book I expected, but in many ways it was better. My favorite character was Gilbert, a sensitive, kind man whose experiences fighting for the British during World War II unexpectedly, and tragically, broaden his horizons to the point where Jamaica feels more like a prison than a home when he returns after the war. All of the characters are very real, and Levy managed to evoke many complex emotions in me and in my friends who read the book.

Despite all this, however, Small Island was not a great book. It had its brilliant moments, but there were too many things left unresolved. I don't know that I will read anything else by Levy, but I am glad that I experienced a part of history that I wouldn't have if I hadn't read the book.

Let me move on before this post turns into a full-fledged review of Small Island!

In other bookish news, I am being forced to endure Firefly Lane, by Kristen Hannah, because it is the next bookclub pick. 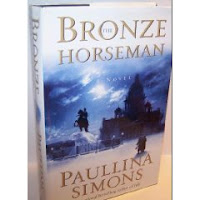 I picked up The Bronze Horseman, by Paullina Simons, because I hadn't read much fiction that was set in Russia at the beginning of World War II (if you're wondering, World War II is, and always has been, one of my favorite historical periods). It's not the greatest thing that I've ever read, but I was really enjoying it until the two main characters FINALLY achieved the one thing they had been working for. And then things went downhill. Fast. Since the book was overdue at the library and I didn't have a strong desire to find out what happens to the two main characters, I returned it this morning and moved on to A Homemade Life, by Molly Wizenberg.

I found out about A Homemade Life over at Roses over a Cottage Door and knew I needed to read it. I'm sort of a softy when it comes to memoirs, and this one has not disappointed! It is the story of the author's cooking and eating life, and I have really enjoyed it. I've also found some recipes that I absolutely must try!

Last, but not least, I have decided to join two more challenges (these will probably be my last!): I am going to join Carl's Once Upon a Time Challenge and Trish's Non-Fiction Five Challenge. I'm going for Quest the Third because I too love Midsummer Night's Dream. The only book I've decided on so far for either challenge is re-reading (if it's allowed!) Till We Have Faces, by C.S. Lewis.

Anyone have any suggestions for either challenge? Please share them!
Posted by Read the Book at 3:31 PM

Thanks so much for joining in the Once Upon a Time Challenge!

As for recommendations, it is always hard without knowing what a person likes, but I would recommend Terri Windling's book, The Wood Wife, for the folklore category. Angela Carter's short story collection, The Bloody Chamber, is an excellent fairy tale collection, as is Susanna Clarke's The Ladies of Grace Adieu. I've heard some really good things about Sarah Addison Allen and I may be trying her out for my own challenge reading this time. Hope those help somewhat. Whatever you end up reading I sincerely hope it ends up being something that you fall in love with.

Carl, thanks so much for the recommendations! I was already thinking of reading Angela Carter's collection based on Claire's (Paperback Reader) suggestion, so this clinches the deal! I'm really excited about the challenge!